Leia Ransley  – Youngest ever recipient of the Spirit of Cumbria Awards 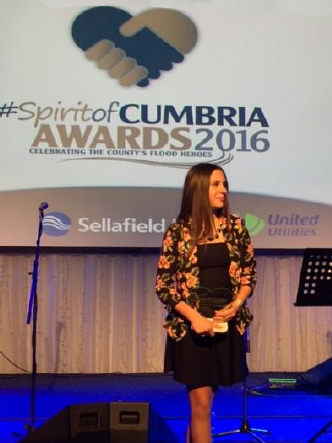 Following the flooding in December 2015 when Trinity School was closed for students, Leia took it upon herself to volunteer at Norman Street Primary every day, helping wherever she could, with students that had been flooded, with community events and with the cookery club after school. Leia worked with Mum to collect all the donated gifts from retailers, assisted in sorting them into appropriate age groups, helped wrap over 700 gifts and then became one of Santa’s elves to deliver them to the children of Norman Street Primary. Gifts that were left were donated to Women and children’s homeless hostels and Samaritans. Leia did all this whilst continuing to do the homework set during the school closure plus nursing her step-dad Steve who had just had major hip surgery.

There were a lot of very deserving and heroic people there. There were hundreds of nominations and just 25 were invited and shortlisted out of those hundreds. Leia was of course one of those. There were 15 awards in total and Leia was chosen as one of the final 15 heroes for the effort she put in to
help people. She had a standing ovation from the visitors as she was the youngest, at just 12, to receive an award and people were in awe of her efforts and kindness and selfless character.

Leia has successfully completed her Archbishop of York award including several cake sales and an Afternoon tea with Norman Street School where £215 was raised for Meningitis and Septicaemia charities.

We are rightly proud of all Leia does at Trinity and in her community. She is a hard-working and dedicated student whose selfless kindness and thoughtfulness know no bounds. She completely deserves this award.